Matthew Macfadyen gives a commanding performance as Joe Miller, a QC at the height of his professional powers.

Macfadyen, one of Britain's leading actors, returns to BBC One for the first time since his acclaimed performance as Arthur Clennam in last year's adaptation of the Dicken's classic, Little Dorrit.

With a repertoire of roles as diverse as Austen's heart-throb Mr Darcy on the big screen, to his award-winning television performance as a paedophile in Secret Life, what attracted Matthew to taking on successful criminal barrister, Joe Miller?

As a rule of thumb, says Matthew: "I always go on the quality of a script and Criminal Justice was fantastic, a really intriguing, if disturbing, page turner. It grips you and you have to know what happens next.

"Ambiguity is at the heart of Peter's writing and at first Joe Miller comes over as a real hero, a good family man. He's a meticulous and dedicated barrister, who specialises in criminal prosecutions and is training to run a marathon to raise money for charity.

"But perhaps all is not what it seems. What's obvious is that Joe has a brilliant lawyerly, academic mind and he's very careful and organised.

"When he puts away his courtroom wig there's a sort of ritual attached to the way he does it. But then we all have idiosyncrasies like a favourite chair or sleeping on a particular side of the bed.

"Joe logs all his running times and distances, but this could be a kind of security for him as it soon becomes apparent that he has a very isolated and fragile wife at home and their relationship is strained. There's something not quite right between husband and wife.

"Once we see Joe at home we witness him checking up on his wife in a slightly paranoid way – the indications are that she's having an affair and I'm not going to say whether he's right. Maybe he's spending too much time in the courtroom trying guilty villains!"

To prepare for his role Matthew enjoyed meeting and talking to Criminal Justice writer, Peter, a former barrister.

"I also went along the Royal Courts of Justice to see the nuts and bolts of British law in action and I can tell you," laughs Matthew, "that it's nothing like those John Grisham movies!

"I spoke to several lawyers and a female QC. My overriding impression was how hard they work and how individual everyone is. There isn't a stock-type solicitor anymore than there's an off-the-peg barrister or a particular breed of legal advisor.

"This experience confirmed what I thought about Peter's scripts that they are really true to life. All his characters are carefully drawn individuals whether they are caught up in the criminal justice system or work for it.

Did Matthew take an equally conscientious approach to his running scenes?

"Well I did run the London Marathon this April. Very slowly mind you. I'm not a runner," underlines Matthew.

"I've no idea really what my time was...probably about 4 hours and 45 minutes. I'm not in Joe's league, nor do I want to be.

"But, the occasion was great fun and I ran with my mates, who got me round if I'm honest. Afterwards I felt brilliant."

Summing up his Criminal Justice experience Matthew says how much he enjoyed making the drama and working again with Maxine: "I've known Maxine for years. We were in Little Dorrit last year, and a while ago had parts in the BBC's The Way We Live Now, Andrew Davies adaptation of Trollope's satirical novel.

"Maxine's brilliant as Juliet and I'm glad she's got the role. Peter writes women so well and I think Juliet's journey is going to make riveting television."

Matthew is currently working in Hungary filming Pillars Of The Earth, an adaptation of Ken Follett's sweeping tale of love, war and strife in 12th century England, in which he plays a monk, Prior Philip. His co-stars include Ian McShane, Donald Sutherland and Rufus Sewell. 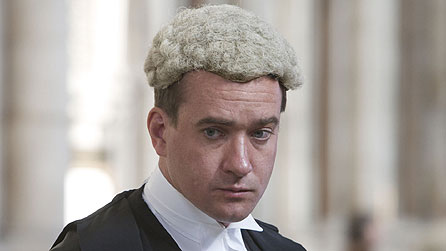