Kim Cattrall’s on the hunt for a man. OK, this is not something new. But this man should be an actor of some standing and he will be required to perform opposite her in Noel Coward’s classic comedy of manners Private Lives.

The production will kick off at the Theatre Royal, Bath around February 22 for a week’s run and then, hopefully, move into the West End. Richard Eyre will direct and Danny Moar, who runs the theatre, will produce with Duncan Weldon and Sonia Friedman.

The show came about after Eyre had to abandon his version of Ibsen’s Ghosts, which was to have starred Ms Cattrall.

As I revealed last week, Iain Glen and Lesley Sharp are starring in a version of Ghosts that goes into the Duchess Theatre early in the New Year.

Eyre and Cattrall chatted in New York, where she is playing maneating Samantha in the Sex And The City 2 film, and discussed several options, including Private Lives.

The West End and UK touring rights are, for now, controlled by Mr Weldon, and he jumped at the chance of having a star of Ms Cattrall’s calibre play the leading lady role.

Private Lives is about a divorced couple who, by chance, find themselves booked into adjoining suites of the same hotel in Deauville when each is on a honeymoon with their new spouse.

‘Kim’s a terrific comedienne and terrifically attractive,’ Mr Moar observed. ‘All we need now is to find someone to play Elyot, who would be a match for Kim.’

Rehearsals are due to begin in early January.

Cattrall and MacFadyen to star in Private Lives (The Stage, 23 octobre 2009). 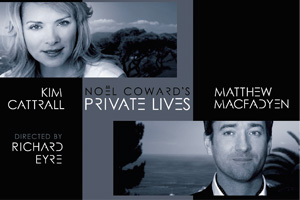 Matthew Macfadyen is best-known for his role as Tom Quinn in the BBC series Spooks. His London stage credits include "The Pain and the Itch" at the Royal Court in 2005 and "Henry IV Part 1 & 2" at the Olivier v, NT also in 2005.

Matthew Macfadyen is best-known for his role as Tom Quinn in the BBC series Spooks. Other television roles include the recent five part BBC drama Criminal Justice II , the 2008 BBC adaptation of Dickens’s Little Dorrit and he won the Best Actor award at the Royal Television Society 2007 Awards for Secret Life. Film credits include Mr Darcy in the 2005 film of Pride and Prejudice, and the Sheriff of Nottingham in Russell Crowe’s forthcoming Robin Hood.

Double-acts look to be the West End order of the day in months to come: Lesley Sharp and Iain Glen in Ghosts; the Cattrall/Matthew Macfadyen Private Lives; and Zoë Wanamaker and David Suchet in All My Sons.